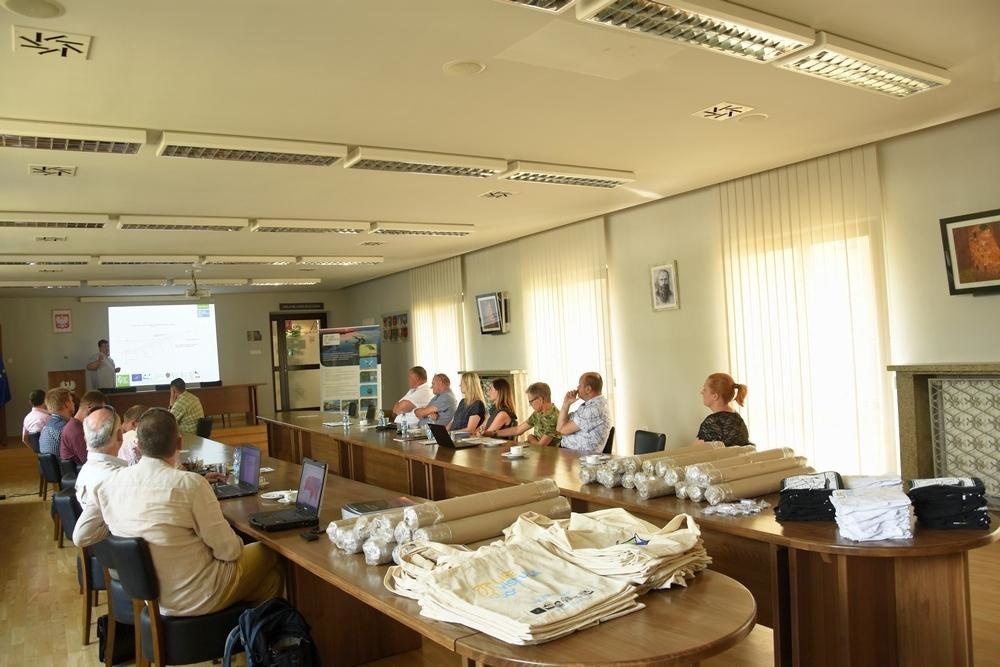 At the end of June 2019, the second meeting of the Steering Committee was held in Oświęcim. It is a body to support execution of the LIVE.VISTULA.PL project.

The guests were welcomed by the Deputy Regional Director for Environmental Protection in Katowice, Regional Nature Conservator Edward Suski. During the meeting, the persons responsible for the project discussed the state of its execution and events that have taken place since the first meeting of the Committee. And at that time a lot happened.

During the meeting, among others, the issues of arrangements with managers of breeding ponds, inspection of dykes and ponds selected for the project and obtaining permits for work on gravel pits were raised. Then the planned tasks on the breeding ponds, on the Goczałkowice Reservoir and those connected with identifying the night heron feeding habitat were discussed.

One of the participants of the meeting was an expert employed for the initial estimation of costs and selection of the methodology of work to execute task C1 – Protection of islands and dykes on breeding ponds. He presented the current technical condition of the ponds and dykes determined after inspection of the field facilities.

He pointed out that the land on which the works will be carried out varies greatly (e.g. silt, peat, clay) and, depending on the terrain conditions, the costs associated with strengthening the dykes and islands will vary significantly. He also noted that in recent years material costs have increased by 30% as well as employee labour.

The contractor performing the expert opinion also presented schemes of island and dyke designs, together with a proposal to secure the dyke with mesh pinned to the ground against beavers and to protect the islands with a mesh and stone basket placed on a geotextile against waves and rodents. The participants of the meeting presented their remarks to the contractors and agreed that each island requires an individual approach, and most importantly, visual inspection of the pond after draining.

The committee members also heard information on the progress in the execution of task C2 – Securing the island on the Goczałkowice Reservoir. So far, an institution has been established that represents the State Treasury as the reservoir manager. Due to consultations in this respect, the tender for technical documentation could not be completed in the assumed time. Therefore, this task will be carried out in 2020. The island will be built in the design and build system. To date, the relevant arrangements have already been made with the manager, and a functional and utility program for the designed facility has been prepared.

Under task C5 – Identification of feeding habitats for the night heron, in 2019, 40 telemetry transmitters were purchased, which are attached to birds living in the breeding colonies.
The Steering Committee was appointed by the Regional Director for Environmental Protection in Katowice in June 2018. It is an advisory and consultative body within execution of the project. The committee members provide substantive support to the project team: they supervise proper execution of the project objectives, give guidelines for the scope of works planned to be carried out, evaluate the executed tasks and participate in ongoing monitoring of the project. The members of the Steering Committee include representatives of local governments from the areas covered by the project, employees of scientific communities, ornithologists, specialists in fisheries management and managers of hydrotechnical facilities. The Committee’s work will finish at the end of the project.