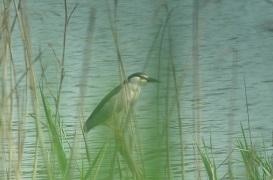 Many people associate night birds with owls. And although it is a good association – the vast majority of owls lead a night life – they are not the only birds that feed by the light of the moon.
They also include the night heron (Nycticorax nycticorax), a bird of the heron family nesting mainly in the south of Poland, primarily in the Upper Vistula Valley, and occasionally also appearing in other parts of the country.

The night heron is a bird much smaller than a grey heron, not much bigger than a crow. The adults have tri-coloured markings – the back and the “cap” on the head are black with a green gloss, the neck and belly are white, and the wings and tail are grey. Its characteristic call, reminiscent of croaking, can be heard at night on the banks of rivers and water bodies. They feed on small fish, amphibians, reptiles and invertebrates, which they catch wading in shallow water. They nest on shrubs and low trees. They nest in small colonies, mainly on islands located in gravel pits and breeding ponds.

The Polish name ” ślepowron” (literally “blind crow”) was derived from the nightlife of this bird – in the past it was even thought that it could not see during the day. The second part of the name comes from the sound. It seems, however, that the Latin name meaning “night raven” seems to be more accurate. The sound of a night heron is more like a raven’s cawing than a crow’s.
Night herons inhabit all continents except Australia and Antarctica, creating several subspecies. In Poland, they only breed, they spend the winter in Africa, coming back to us in March each year.